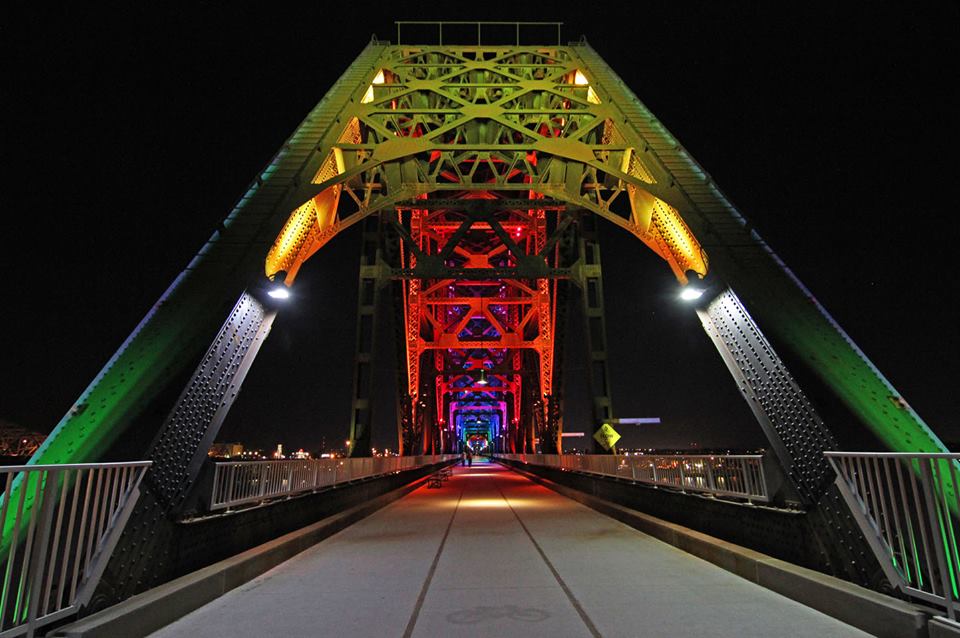 I’m going to use the story of the Big Four Bridge to bring home the point of this blog entry. This is an old story but the lesson behind it still rings true today. Five years ago dogs were banned from the Big Four Bridge (a pedestrian bridge that opened up in Louisville, Kentucky). Here are a few articles:

When the bridge opened, everyone was so excited. My parents went down there and took a stroll. Shortly afterwards my mom called and gave me the scoop on the poop – “It’s not the quantity of the dog poop. It’s the quality of the dog poop. It’s puddles of diarrhea that pet owners can’t pick up with a bag, so they leave it. And it’s everywhere. People are too busy looking at the view and step right in it.” Now you can see why they were power-washing it off.

Here’s the problem with the typical American dog (not all, but a decent majority of dogs) – often the only time it is taken in a car anywhere is usually to the vet, the groomer, to a boarding facility; what the dog experiences at the end of that “go bye-bye” trip is not exactly loads of fun.

“Nuh-uh! I sometimes take my dog to get ice cream or to the park!” In a dog’s mind, a routine visit to the groomer or vet is burned into the dog’s brain (expectation) more than the occasional trip to the park.

So if you don’t take your dog anywhere except for those 4 places above, and you haven’t worked with the dog on its anxiety (go to a trainer a few times and then quit), taking it to something like a expansive bridge that’s a 2 mile walk round trip (exercise also gets the gut moving) is going to end up with a poo.

You often will not see my foster dogs at rescue events because they haven’t yet been fully acclimated to stimuli and situations (other rescues bring dogs that have loose stool right around their booth space. Ugh. Poor dog.) Eventually my fosters will come with me and you will find them sleeping soundly on the ground or in the crate at the back of my booth. They weren’t like that when I got them, but with some work they can achieve peace of mind. As one jewelry vendor sitting next to me last year said, “I didn’t know you had a dog in your booth. He’s so quiet!” (This was Neil.) If and when they poop, and what the poop looks like, tells me about the dog’s state of mind. 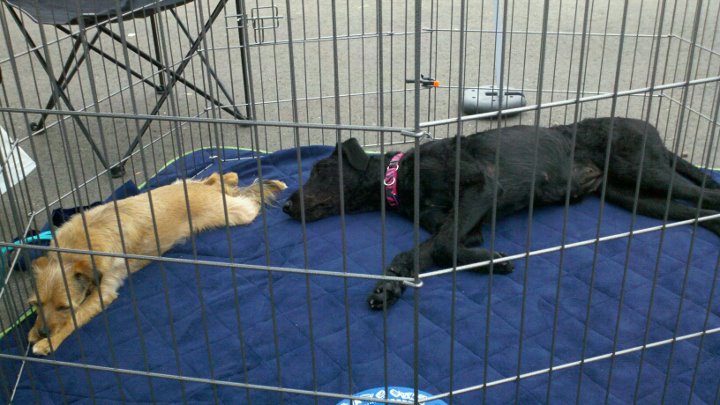 Dogs are being banned from places not because our communities are becoming unfair dog-hating Nazis. Dogs are being banned because dog owners cannot understand nor read their dog’s behavior, they don’t desensitize or train their dog, and some people just don’t care and expect the dog to adapt.

It is entirely possible a food change is what is causing diarrhea, or a food allergy or other physical ailment (IBD), but people need to also take into account the seriousness of mental stress on a dog’s GI tract. (And if the dog is sick or going through a food change, please don’t take it out into public. How many more layers of stress will you pile on before it’s considered cruel? Good grief.)

POMH foster dogs are adopted out with the peace they can achieve from training and coupled with the use of a crate. I was able to take Roger to a week-long training workshop in Buffalo, NY, he didn’t make a peep the entire week when he was crated in the room with other dogs he didn’t know. The following month I transported him to Canada to meet his adopters part way, even the border guard looking at him crated in the back of our SUV was met with silence/security/no reaction. When Roger’s adopters drove him home, he slept soundly crated in their car, the serenity transferred. A dog who was dumped 3 times because of his stress/behavior, and a dog who was so full of stress when he was picked up from the shelter that there were puddles of diarrhea in his run,  was put on a path to a stabilized life where he can enjoy seeing the world, and he’s an easy dog to take places. He is now a joy to be around. He’s yet to have diarrhea from stress. That is the ultimate gift you can give a dog. This is the life all pet owners should provide for their dog, but sadly that’s not the case.

The media spin is that dogs should be allowed to go anywhere and do anything, life is “just so unfair for pet owners.” As a dog lover, I can’t disagree more because for me it’s impossible to overlook the stress it causes them and the property destruction it leaves behind. IMO, nothing is more upsetting than seeing a dog overcome with stress and the owner is just oblivious. More dog bans are in our future the more selfish society becomes (just look at the cracking down of the service/therapy dog industry). Think before you drag your dog out somewhere. Instead of joining the campaign to “allow dogs onto the bridge,” try campaigning for the mental fortitude of dogs everywhere. If you have a dog that stresses, there are plenty of good trainers out there that can help you train your dog to overcome it – don’t wait, give them a call – you’ve got nothing to lose and everything to gain.

Piece Of My Heart rescue was founded in 2010. This blog is based off of my many years of rescue work (starting with my volunteering for a Cincinnati-based no-kill shelter in 1998-99), learning from trainers, vets, and other high-end canine professionals. People always ask, “How do you do it?” I can’t sum it up in a sentence or paragraph, but this blog should pretty much cover most of it with each topic that is discussed.